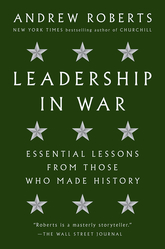 Leadership In War: Essential Lessons From Those Who Made History

Epic lessons of victory and defeat

Meticulously researched and compellingly written, Leadership in War presents readers with fresh, complex portraits of leaders who approached war with different tactics and different weapons, but with the common goal of success in the face of battle. Both inspiring and cautionary, these portraits offer important lessons on leadership in times of struggle, unease, and discord.