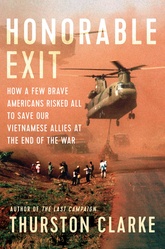 Honorable Exit: How A Few Brave Americans Risked All To Save Our Vietnamese Allies At The End Of The War

American valor in the final days of Vietnam

Thurston Clarke begins Honorable Exit by describing the iconic photograph of desperate Vietnamese scrambling to board a helicopter evacuating the last American personnel. By unpacking the surprising story of heroism that the photograph actually tells, Clarke launches into a narrative that is both a thrilling race against time and an important corrective to the historical record. For what is less known is that during those final days, scores of Americans risked their lives to assist colleagues, neighbors, friends, and even strangers in escape. By the time the last U.S. helicopter left Vietnam on April 30, 1975, these Americans had helped transport 130,000 South Vietnamese to the safety of U.S. bases in Guam and the Philippines.

“Thurston Clarke’s Honorable Exit is a brilliant recounting of President Gerald Ford’s vital leadership during the last days of the Vietnam War. Over 130,000 South Vietnamese allies were saved because of Ford’s moral certitude. This is the missing book on the Fall of Saigon we’ve been waiting for. An epic narrative history for the ages!”—Douglas Brinkley, author of Cronkite

“Thurston Clarke has a genius for finding episodes in history that deserve reexamination. Just as the U.S. rescued its employees and allies from the embassy roof, this gifted story-teller has found gems of heroism, honor, and suspense in an agonizing chapter of the American story.” —Strobe Talbott, former Deputy Secretary of State and distinguished fellow in residence at Brookings

“America's years in Vietnam were full of shame, but the last days of the war saw a remarkable effort at redemption. Breaking rules set by their higher-ups, ordinary Americans--servicemen, diplomats, spies, contractors--moved heaven and earth to get their Vietnamese friends and allies to safety. Thurston Clarke's Honorable Exit brings this little-known story to light with the speed and power of a riveting thriller. It challenges us to remember a time when Americans refused to abandon desperate people in a far-off country. It's a kind of Schindler's List for America's lost war.”—George Packer, author of The Assassins' Gate: America in Iraq and The Unwinding: An Inner History of the New America