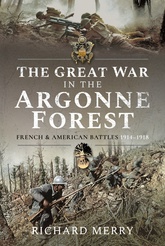 The Great War In The Argonne Forest: French And American Battles, 1914-1918

The annals of the First World War record the Argonne Forest as the epicenter of the famous Meuse-Argonne offensive of 1918, the largest American operation launched against the Germans during the conflict. However, During 1914 and 1915, French and Italian soldiers also confronted the Germans in this dense forest. All sides suffered horrendous casualties, as each sought to break through the lines.

The epic four-year campaign is the subject of Richard Merry’s vividly written account. Merry brilliantly traces the stories of people—including his great-uncle—who became embroiled in the epic forest struggle which culminated in the cold, gas-filled autumnal mist of 1918, when the New Yorkers of the 77th "Liberty" Division fought there.