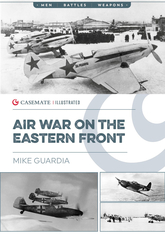 Air War On The Eastern Front

If you do not accept or decline by the reply date, you will be automatically shipped a Featured Selection and charged $1 more than the member price listed above.

The Red Air Force soars back

Having conquered most of Western Europe, Hitler turned his attention to the vast Soviet Union in 1941. Disregarding his Non-Aggression Pact with Joseph Stalin, Hitler launched Operation Barbarossa, a full-scale invasion of the Soviet homeland, aimed squarely at Moscow.

In the skies over Russia, the airmen of the Luftwaffe made short work of the Red Air Force during the opening days of Barbarossa. To make matters worse, Stalin had executed many of his best pilots during the perennial "purges" of the 1930s. By 1944, however, the Soviet airmen had regained the initiative and fervently wrested air superiority from the now-ailing Axis Powers.

This fascinating and informative book captures all the action with 150 photographs and illustrations.