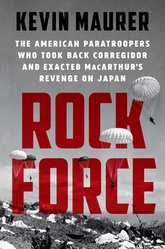 Rock Force: The American Paratroopers Who Took Back Corregidor And Exacted MacAruthur's Revenge On Japan

In late December 1941, General Douglas MacArthur, caught off guard by the Japanese invasion of the Philippines, is forced to retreat to Corregidor, a jagged, rocky island fortress at the mouth of Manila Bay. Months later, under orders from the president, the general is whisked away in the dark of night.

In early 1945, MacArthur returns to take back the island. He calls on the 503rd Parachute Infantry Regiment to jump onto the island and wrest it from some 6,700 Japanese defenders who await, fully armed and ready to fight to the death.