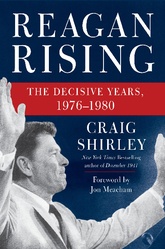 In 1976, when Ronald Reagan lost his second bid for the GOP presidential nomination, it looked like his political career was over. Yet a year later, at the Conservative Political Action Conference, Reagan introduced us to a "New Republican Party"-one that looked beyond the country club and corporate boardroom base to embrace regular, working-class Americans. Reagan's movement quickly spread, leading to his landslide presidential victory in 1980.

Craig Shirley charts Reagan's astonishing rise, his personal evolution from angry anticommunist into a more reflective and hopeful leader, and his transformation of American conservatism. It is a compelling account of the outsized figure behind the Republican party's most radical reinvention.

"This book is serious history that reads like a page-turner novel. Craig Shirley's prose, while carefully annotated, is as compelling as fireside stories told by an eye witness. The details and insights in this book provide must-know context for American politics past, present and in the future."-Mari Maseng Will, former Reagan White House speechwriter

"There are few historians, if any, better qualified to write on Ronald Reagan than Craig Shirley. His previous works on the life and times of Ronald Reagan have already established him as the nexus of insight into our 40th President. Reagan Rising is proof positive of this claim, especially to the many who still hunger for new, authentic and rarely seen moments of important Reagan history. Mr. Shirley has taken on a tough subject in examining a remarkable and complicated man. Every reader will benefit from the care Mr. Shirley has taken to get it just right."-John Heubusch, executive director, The Ronald Reagan Presidential Foundation

"A compelling and insightful look at one of the most significant periods in modern American history....Craig Shirley brings new insights and captivating stories that led to Reagan's political rise. If you want to understand Ronald Reagan, the man & the politician, this is a must-read."-Steve Scully, host of Washington Journal, C-SPAN

"Ronald Reagan defined a political party for a generation. He defined an ideology, shaped in his view of what true liberty, individualism, and American conservatism really meant. Craig Shirley's Reagan Rising is the go-to book on how this came to be."-The Honorable Georgette Mosbacher, Commissioner of the United States Advisory Committee on Public Diplomacy, US State Department

Craig Shirley is the author of Rendezvous with Destiny, Reagan's Revolution, and the New York Times bestseller December 1941. Widely known as a leading presidential historian, he is also the Visiting Reagan Scholar at Eureka College, Reagan's alma mater, and lectures often at the Reagan Library and the Reagan Ranch.