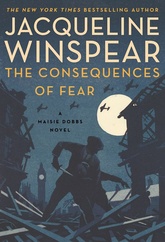 The Consequences of Fear

The fog of war

October 1941. While on a delivery, Freddie Hackett, a message runner, witnesses an argument that ends in murder. Crouching in the doorway of a bombed-out house, Freddie waits until the coast is clear. But when he arrives at the delivery address, he’s shocked to come face to face with the killer.

Dismissed by the police when he attempts to report the crime, Freddie goes in search of a woman he once met when delivering a message: Maisie Dobbs. While Maisie believes the boy and wants to help, she must maintain extreme caution: she’s working secretly for the Special Operations Executive, assessing candidates for crucial work with the French resistance. Her two worlds collide when she spots the killer in a place she least expects.

“Outstanding…. Maisie and her loving family of supporting characters continue to evolve and grow in ways sure to win readers’ hearts. Winspear is writing at the top of her game.”—Publishers Weekly, starred review