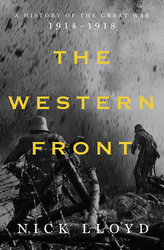 A panoramic history of the Western Front

The Western Front evokes images of mud-spattered men in waterlogged trenches, shielded from artillery blasts and machine-gun fire by a few feet of dirt. This iconic setting was the most critical arena of the Great War, a 400-mile combat zone stretching from Belgium to Switzerland where more than three million Allied and German soldiers struggled during four years of almost continuous combat.

In this epic narrative history, the first volume in a groundbreaking trilogy on the Great War, acclaimed military historian Nick Lloyd captures the horrific fighting on the Western Front beginning with the surprise German invasion of Belgium in August 1914 and taking us to the Armistice of November 1918. Includes 35 photos and 8 maps.